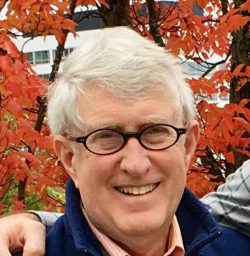 We are all saddened to learn of the passing this week of our classmate and friend, Dan McGehee. An excellent article about Dan was recently posted on the University of Tennessee Knoxville website that is a great tribute.  The funeral and Celebration of Life service will be held at the Episcopal Church of the Ascension, 800 S Northshore Drive, Knoxville, Tennessee, on Friday, November 8, 2019, at 3:00 PM. A reception will follow in the parish hall.

Daniel Fisher McGehee, age 75, passed away October 29, 2019 at his home in Knoxville, TN. He is survived by his cousins: Art Alexander and wife Linda, Mark Alexander and wife Julie, Lisa Patterson and husband Mike, Susan Couch, Bill McCrum, and Greg Scott. He leaves a rich legacy of service, mentorship, fraternity, and patronage of the arts that inspired and elevated many lives in the Knoxville community and beyond.

Dan was born June 27, 1944 in Paris, TN to Jack and Frances Dunn McGehee, who instilled in him an enduring spirit of service. Dan began his academic career at South East Missouri State College in 1962 and transferred to the University of Tennessee in 1964 where he completed a bachelor’s degree in 1966. After graduation, Dan joined the National Guard where he rose to the rank of Sergeant First Class. From 1969 to 1971 he worked for a political consulting firm in Washington, DC where he ran Howard Baker’s first statewide polling. Dan earned his Doctor of Jurisprudence from the University of Tennessee’s College of Law in 1974.

In 1988 Dan founded his own law firm where he remained the principal partner for the remainder of his life. Based in downtown Knoxville, his firm quickly developed a reputation for excellence, and, with the aid of Dan’s mentorship, it has served as a springboard for many now-prominent attorneys. Dan was also an active member of the Knoxville Bar Association, Tennessee Bar Association, and Tennessee Criminal Defense Lawyers Association.

Dan’s legacy of mentorship was strongly expressed through service to his fraternity, Pi Kappa Alpha. He joined the Missouri State Chapter in 1963. In 1967, Dan transferred to the Knoxville Chapter where his willingness to serve, lead, and mentor remained constant for 52 years. He was an advisor to the Tennessee chapter and served for 10 years on the Fraternity’s Supreme Council. In 2012 he was honored by the organization as a Lifetime Achievement Recipient of the Order of the West Range.

Dan was a passionate supporter of the arts. For decades, he gave generously of his time and means to a variety of local art organizations. He served on the boards of the Knoxville Opera Company and the Knoxville Museum of Art. He was a faithful patron of the Knoxville Symphony Orchestra and the Clarence Brown Theatre. Dan was a lifelong collector of art and supported the work of many early career artists in the Knoxville community. He was firmly committed to the value of music, and an enduring component of this legacy will be the creation of the Jack Fisher McGehee and Frances Dunn McGehee Endowment for the Arts, which, under the direction of the University of Tennessee Foundation, serves to bring live music to middle and high school students in Paris,TN and provide student scholarships.

Dan was active in several faith-based, charity, and service organizations in his community. He maintained strong relationships to organizations such as the Boys & Girls Club, Central Business Improvement District, the Great Smoky Mountain Council of the Boy Scouts of America, and the Optimist Club. He was a proud member of the Episcopal Church of the Ascension, where he sang tenor with the Parish Choir. The FISH Food Pantry held a special place in his heart; he served as this organization’s treasurer and devoted many Saturdays to serving food to those in need.

It has been said: “When the student is ready, the teacher will appear.” And, for many of us, that teacher was Dan. He would often take an aspiring young person “under his wing” and share his wisdom and community of friends. Dan understood that decisions determine destiny and he was always there to advise and uplift during life’s critical junctures. Many of us can see that, in the moments that shaped the trajectory of our lives, Dan was there. In the law office, on campus, on the sidewalk, at the kitchen table, at the hospital bed—Dan was there.

Dan saw people for their potential—and he would do all he could to help them achieve it. He never stopped encouraging young men and women to be more than they thought they could be, and the love and guidance that he provided will endure for generations. It would have been fitting to have pallbearers, for, after all, so much of Dan’s life was spent carrying us.