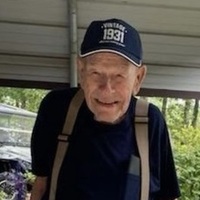 Billy G. Winchester, age 90 of Paris, TN passed away Sunday, September 26, 2021, at Henry County Medical Center. There will be no visitation and no services for Mr. Winchester per his request.

Billy Gene Winchester was born June 7, 1931, in Henry County, TN to the late Leonard Void Winchester and the late Pokie Cox Winchester. On August 29, 1953, he married Mattie Elizabeth Presson Winchester and she preceded him in death on November 25, 2007. Billy went to Grove High and is listed as being in the Future Farmers of America in 1948. (Class uncertain.)

Besides his parents and wife, Billy was also preceded in death by two sisters: Lois Cochran and Mary Nell Stephens; and one brother, Jimmy Winchester.

Mr. Winchester served in the Tennessee National Guard for 12 years (1947-1959). He retired from Mohon International after 38 years where he was plant superintendent.