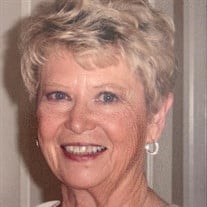 A Paris, TN native, Barbara was born to the late William and Lillian Hart Vaughn on October 24, 1934; the second of three daughters. Barbara grew up surrounded by love and an unbreakable sisterly bond that began in childhood and continually grew stronger in the many years that followed. Sisters, Mary, Barbara, and Kay planned annual “sister trips,” spending 1-2 full weeks together, enjoying their time together, as well as time with each other’s growing families.

Barbara attended E. W. Grove High School in Paris, TN. She married her high school sweetheart, Henry Earl Thompson in 1953 and they shared 57 joyful years of marriage before he passed away in March 2010. Barbara was a member of Englewood Baptist Church.

One of her greatest passions was the Tennessee Volunteers. Her blood ran Orange and anyone who knew her knew that when a Tennessee game was on, she would answer neither her phone nor her door until the final whistle blew.

She loved playing cards, cooking big meals, and spending time with her family. Her grandchildren fondly remember a sleepover at Nana’s house always ended with a big “Nana Breakfast,” “Nana Gravy,” and a jar of “Nana Jelly.” Among the many traditions she’s passed on, one of the most delicious is Barbara’s yearly Strawberry Jelly – complete with a trip to the strawberry patch to kick off the whole experience. She’d make (from scratch!) jar 30+ jars of strawberry jelly every year. Her generous and caring nature, determination, and love can be tasted in every batch and initiates a grateful smile. She will be remembered for her passion for life and living it to the fullest. Barbara embodied incredible strength and determination; she encouraged her family to never stop believing, trusting, and pushing themselves towards happiness and greatness – a trait that still continues to inspire all those who knew her.

Barbara’s legacy is carried on by two sons, Michael Earl Thompson and his wife, Carol of Lexington, TN and Randy Thompson and his wife, Patricia of Finger, TN; and one daughter, Lisa Thompson Meeson of Jackson, TN. Barbara’s memory will be cherished by eight surviving grandchildren, Brandon Thompson of Pensacola, FL, Amanda Brooks (Casey) of Lexington, TN, Melinda Meeson of Madison, MS, Hunter Thompson (Alex) and Allison Meeson Ealey (Dakota), both of Milan, TN, Hannah Sokoloski (Connor) Haley and Amber Thompson, both of Jackson, TN, and five great-grandchildren, Kaylynn and Lillian Brooks, Henry Edward Ealey, Carly Sokoloski, and Sawyer Thompson. She is also survived by her sister, Kay Carter of Seymour, TN and sister-in-law, Nita Adams of Jackson, TN. In addition to her husband Earl, Barbara was preceded in death by both parents, William, and Lillian Vaughn; one brother, Thomas Halford; and one sister, Mary Etheridge.

A funeral service will be held at 10:00 AM at Arrington Funeral Directors Friday, December 31, 2021, with Dr. Philip Jett officiating. Prior to the service, the family will receive family and friends for a visitation from 9AM until service time. Entombment will follow at 2:00pm at Hill Crest Memorial Cemetery in Paris.

The family requests any memorial contributions be directed to the Earl Thompson-TLM Engineering Scholarship Fund, University of Tennessee at Martin, Martin, TN 38238.

Memorial contributions can be made here: https://joingenerous.com/arrington-memorial-barbara-vaughn-thompson-r2w3a43