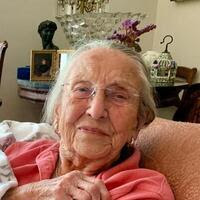 Anne Wilson Blanton Crosswy, age 96 of Nashville, TN passed away peacefully surrounded by family at her residence Wednesday morning, January 19, 2022. She grew up in Paris, as did her parents and grandparents. Her funeral service will be 2:00 PM Thursday, January 27, 2022 at McEvoy Funeral Home in Paris, TN, with Dr. Ben Boone officiating. A private family burial will follow at Maplewood Cemetery. Visitation will be at 11:00 AM Thursday, prior to the service at McEvoy Funeral Home. Pallbearers for Mrs. Crosswy will be Caldwell Crosswy, Stuart Naylor, Sarah Crosswy, Mark Layne, and Steve Greer. Honorary pallbearers will be Spencer Crosswy and Chip McLean. (absent due to COVID exposure)

Anne Wilson Blanton Crosswy was born September 8, 1925 in Paris, TN to the late Fred William Blanton and the late Myrtle Avis Wilson Blanton. On June 19, 1950 she married William F. “Bill” Crosswy, Jr. and he preceded her in death on June 23, 1970.

A graduate of the E.W. Grove High School Class of 1943, Mrs. Crosswy was a longtime member of First United Methodist Church in Paris and she was active in many local organizations including DAR, UDC, and Delphian. She got her degree in music education from Murray State University which is where she met her husband, Bill Crosswy. She received her masters plus 30 hours toward her doctorate in special education.

Mrs. Crosswy taught school in Paris for over 30 years. She loved history, genealogy, gardening, birds, and she was an avid reader. She enjoyed collecting antique dolls and setting up miniature dollhouses.

Mrs. Crosswy was an amazing woman who managed to put both of her kids through Vanderbilt as a single mom. She worked on the committee to save Lee School and in the 1960’s she led the effort to save the Henry County Courthouse.

Besides her parents and husband, Mrs. Crosswy was also preceded in death by her aunt, Margaret Blanton Reeves.

The family would like to thank her sitters, Marcia McKinnon and Senita Sawyers, and a special thanks to Kelly Perez who stayed with Mrs. Crosswy at night with much love and care.

In lieu of flowers, donations may be made to the William F. Crosswy Scholarship Fund, St. Jude Children’s Research Hospital, The Shriners, or the charity of the donors’ choice.